SlashGear in proclaiming the death of the 3DS:

Unlike its predecessors, the 3DS is facing a slew of issues. For one, the 3D effect falls short for many folks, and after a while, it becomes more like a gimmick than an integral part of the gaming experience. What’s more, the 3DS’ lack of compelling games (which Nintendo says, will be addressed by the end of this year, thanks to Super Mario 3D Land), is holding it back.

But I think it goes beyond that. The 3DS is failing right now, more than any other reason, because of smartphones and tablets offering compelling gaming experiences. And when the iPhone 5 launches in the next several weeks, you can expect it to officially kill off the 3DS.

This isn’t the only thing I’ve read discussing the quandary that Nintendo finds itself in. Example: Tycho in yesterday’s Penny Arcade post, discussing the battery life of the upcoming PlayStation Vita:

This isn’t just true of the Vita, of course, this battery stuff; if anyone actually played their 3DS for any length of time, I suspect they’d come away similarly despondent, pressing buttons which don’t do anything and looking at a screen which is connected to nothing.

This is that “portability” thing when we talk about a “portable” gaming system.  Portability means more than the ability to carry something or stow it on your person.  Obviously, the word doesn’t mean that – it’s not bound up in the roots.  But the implication is that something may be carried and still retain its function.  Right?  Right.  This isn’t really a philosophical distinction, it’s not hair-splitting for dialectic giggles.  A portable without robust power storage is not.

Handheld gaming is facing tough challenges on multiple fronts at the moment. I’m increasingly finding myself choosing to play portable games on my iPhone or iPad. I’ll go so far as to know I’m going out somewhere where I will have time, look at my DS, pick it up, and then put it back down as I decide it’s not worth the time.

The PSP was arguably always a failure; it failed to capture a solid market and was a product that never seemed to find decent footing. But the DS was one of the most successful game consoles in history, with a ridiculous sell-through and a strong appeal to the casual market as well as great long-form experiences (it’s a great platform to find quality JRPG experiences and 2d platformers). Nintendo sold through no less than four revisions of basically the same hardware—which I believe is also contributing to the market resistance to the 3DS.

Satoru Iwata believes the 3DS has a future, at least officially in response to calls for Nintendo to embrace smartphone development:

“This is absolutely not under consideration,” he said. “If we did this, Nintendo would cease to be Nintendo. Having a hardware development team in-house is a major strength. It’s the duty of management to make use of those strengths.

“It’s probably the correct decision in the sense that the moment we started to release games on smartphones we’d make profits. However, I believe my responsibility is not to short-term profits, but to Nintendo’s mid- and long-term competitive strength.”

Keep in mind that this is after the Nintendo showcase at TGS, traditionally their marquee event, caused a market reaction that sent Nintendo’s stock tumbling 5%.

For me, it boils down to the following: for $40, I can have this copy of a remake (a remake!) of perhaps the best game of all time: 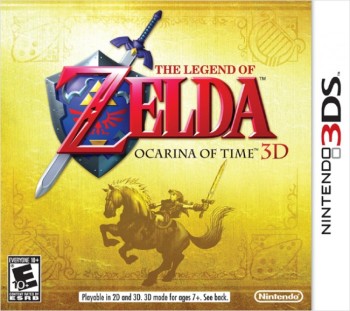 For about 60 bucks (not counting buying things on sale), I can have this: 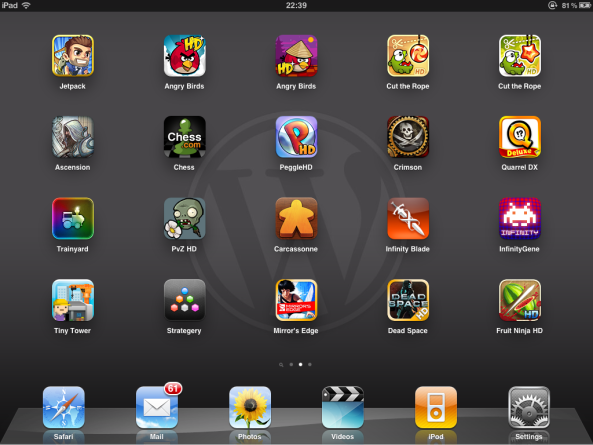 And I don’t have to go to a GameStop or similarly annoying store to buy them; I just load up the App Store, make the purchase, and download it. Some of the games on this list have provided me with longer experiences than many DS games, and certainly a better value proposition in the long-term.

This doesn’t even approach the added value of the iPad being my salvation from airplane movie selections (look; an entire TV season in my backpack!), or the fact that I do a majority of my web reading on this device (I found the articles linked in this post using various apps on my iPad). Or the fact that the same experiences are available on the phone I already have with me anyway, or that both devices have at least double the battery life (in the case of iPad, more like triple or better).

There’s a value train that left the station a while back, and Nintendo is not on board. I love Nintendo and the minds they have there designing interactive experiences. Their games were a special part of my childhood. I don’t want them to fail, and I don’t want to miss out on what they are doing (which will likely lead to my purchasing whatever the rev 2 hardware is for 3DS).

Sony finds themselves in a similar situation; an over-designed piece of hardware that will likely have compelling games but a like pricing structure and comparable challenges ahead. The Vita is sure to be impressive and looks good on paper.

But unfortunately for both those companies my money is better spent on iOS.

[…] This is not about price. This is about making “safe” choices. For years enterprises have chosen—and let themselves get locked into—Windows because, yes, no one got fired for buying Microsoft.

But these companies also bought Microsoft because, like AIG, Microsoft simply seemed “too big to fail” and Apple did not. Well, that’s as may be, but there’s “fail as a company” and then there’s “fail to deliver”—and Microsoft has certainly failed to deliver.

So, congratulations, enterprises! You’re left holding the bag for an outdated desktop operating system bundled with a costly and uncertain path forward!

Seriously, if it were solely about price and choice, every company in the world would be running Linux.

I'm a husband, father to five, and Automattician. I love games, life, nerdy things, and the Cardinals, and am a fake plastic rock star playing St. Louis at least once a week.
Join 12 other subscribers