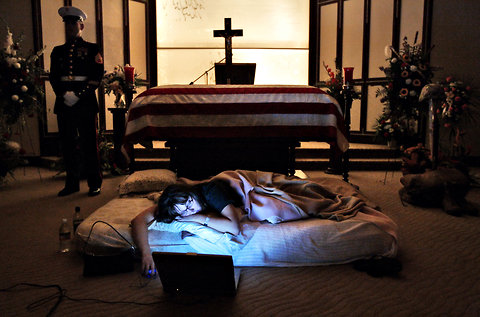 What brings the tears to my eyes is not just the bereaved young woman, but the Marine who stands behind her. In an earlier photo in the series, we see him building her a little nest of blankets on the air mattress. Sweet Lord, I cry just typing the words, the matter-of-fact tenderness is so overwhelming. So soldierly. But in this photo — the one that lives on and on online — he merely stands next to the coffin, watching over her. It is impossible to be unmoved by the juxtaposition of the eternal stone-faced warrior and the disheveled modern military wife-turned-widow, him rigid in his dress uniform, her on the floor in her blanket nest, wearing glasses and a baggy T-shirt, him nearly concealed by shadow while the pale blue light from the computer screen illuminates her like God’s own grace.

For a lot of people, Memorial Day has become something that’s more about a day off work, cooking out, and sales at your favorite stores. It’s yet another thing that we’ve seen fit to over-commercialize until lots of people don’t even know what it really means.

Read the whole thing. Sadly, the Rocky Mountain News is no more, and I wasn’t able to find the original piece on the shell of a website they have left.

UPDATE: My buddy Ken found some related photos in a slideshow at the Times here.

I'm a husband, father to five, and Automattician. I love games, life, nerdy things, and the Cardinals, and am a fake plastic rock star playing St. Louis at least once a week.
Join 12 other subscribers